Brothers: A Tale of Two Sons is more than just an interesting toy for your iPhone. Two brothers, Naya and Nai, consistently solve simple riddles, help each other climb over the abyss, pull levers, twist some mechanisms. A distinctive feature is that you will control the brothers at the same time, because two joysticks will appear in the lower left and right corners … Let's start at the beginning, the game is available in the AppStore at a price of 149 rubles. Next, just immerse yourself in this wonderful world. 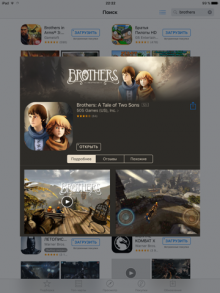 As described earlier, you will have two joysticks available to control the brothers: left and right. I'll tell you a little about the plot: Having recently buried their mother, two boys are faced with a new misfortune – a serious illness of their father. Having put their father on the cart, they must go on a journey and fetch water from the Tree of Life. They will have to work together to survive. One of them should be strong when the other is weak, courageous when the other is overcome by fear. In A Tale of Two Sons there is not a single dialogue in the usual sense: the characters communicate with gestures and in a primitive language, and there are only twenty words of text, and even those refer to menu items. However, once again calling Brothers a game, I would like to emphasize once again that it is strong not in the gameplay, but in the plot. Brothers is almost the only modern game that can be completed without getting a single achievement. There is no leveling of characters, collection of equipment and weapons, difficulty levels and other things that we are used to seeing in other games. At the same time, A Tale of Two Sons is an interactive story, without going through which to the end, you will not be able to tear yourself away from the screen.