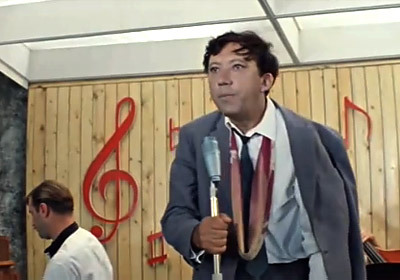 The TV game 'APOZH' migrated to iPhone. Now you can guess the songs yourself, and not just follow the heroes of the TV. The essence of the game is very simple. One player hums a song in secret from the second participant. The song is then played backwards and the second player must guess the piece of music played. The menu of the program is very friendly and at each stage tips are given on what to do. So if the singer doesn't know what to perform, the application will suggest a version of the song. It is better to sing famous songs, trying to output the melody. It seems to me that it is not victory that is important here, but a fun time. After the song is played, you will be prompted to listen to it and show how many fragments the song is divided into. Then the second player is asked to guess the whole song at once without breaking it into fragments. Already at this stage, the fun begins, because the distorted words resemble the tunes of the 'Nanai boys' 🙂 If the song is not guessed, then you have to hum, breaking your tongue, in fragments. If it seems that the text sung by the second player is close to a mirror image of the original performance, then this fragment is recorded. At the end, all the fragments are combined into one file and it is proposed to guess the song by listening to the efforts of the second player. If there is confidence in the correct execution, then it can be compared with the original. In the settings you can set the length and number of fragments. The shorter the fragment, the easier it is to reproduce the chant of the 'Nanai boy', however, the large number of fragments delays the fun process a little. I have already said that victory is not so much important here as a simple fun participation. The game is paid, but there is a free version with ads and a limited number of fragments.