Light Mp3 Player is another VKontakte music player, expensive and … Today we are testing another VKontakte music player from Andrey Laptev Light Mp3 Player for a horse price tag of 439 rubles. Surprisingly, the cumulative rating of App Store is 4 full stars, which means that users found something in it. It's time to dig in and we, maybe we will be able to bite out the zest … Personally, I like simple and intuitive applications that solve specific problems so that a 6-year-old can understand the interface. In Light Mp3 Player, all windows are signed, and the icons of buttons and controls are familiar – set off. The application is not unique, there are a dozen of similar players in App Store. For example, a free Orange player. With its help, a registered user of the social network VKontakte gets access not only to his music collection, but also to the storages of his friends and connected communities, it is enough to log in and open the application access to his account. Light Mp3 Player has an interactive search and playlist system. With a few taps, you can access the most popular music tracks or build a collection based on personal preferences (recommendations). The whole screen is reserved for playlists, you can create and edit playlists, instantly switch or delete between them. In the player, everything is as usual: playback controls, mixing, looping, loading screen and a link to the current playlist. I liked the fact that the purpose of the icons is clear at first glance. If the track being played has artwork, it will be automatically loaded during playback. 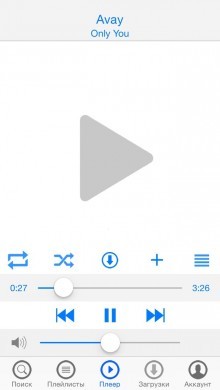 To access music in live mode, you need an Internet connection, preferably faster than GPRS (the speed is not enough for continuous buffering). Songs can be downloaded to the phone memory in the application's own library and listened to offline. Unfortunately, there is no possibility to load music using Light Mp3 Player into the standard iOS application 'Music', the whole reason is the 'Apple' sandbox. As for me, the application is worthwhile, but obviously not the money that the developer wants for it. It looks like the developer has invested a lot of money in the promotion and is now trying to recapture them. App Store has a lot of competitors, if not free, then much cheaper. Yes, Light Mp3 Player is simple and solves the problem, but somehow expensive. If your chickens don’t peck money, buy it. It is not recommended for thrifty ones, we have repeatedly reviewed good analogs, even more functional ones.