At the last October conference Apple dedicated to new iPad and software products, special attention was paid to the mobile software of the iLife and iWork packages. The company kicked again Microsoft, whose Office Mobile cannot be called a worker. And announced that all new software products will be free with the purchase of a new iOS device. All programs received a redesign in the style of iOS 7, as well as many innovations. The photo editor received support for 64-bit architecture, which allows you to view and edit photos much faster. The developers have added new tools and effects for photos, you can also now share pictures by combining them into a slideshow, and then sending them to another user. The ability to order prints of photographs, including panoramic ones, has also been added, although it does not work in Russia at the moment. 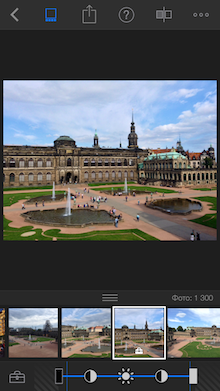 The video editor has also been completely redesigned with a new design and 64-bit support. The developers have simplified the program, making it easier to work with content: edit video, apply various effects, improve quality, speed up or slow down the video. Apple stated that the new version of the program brought many desktop-level editing capabilities. For example, you can split the screen, turn on the Picture-in-Picture effect, or control the sound with just a couple of taps. There's also a new iMovie Theater feature that allows you to show your movies or trailers on any device Apple, including Apple TV. GarageBand is arguably the most significant update in its history at iOS. In addition to the redesign, the program is now distributed absolutely free. One of the important innovations is the ability to record up to 32 audio tracks in one project. So you can create a great composition with great overlapping. Added support for the Inter-App Audi o function, with which you can record music from third-party applications directly to GarageBand. Now you can work on creating a composition with friends, for this you can use AirDrop to quickly transfer information. It also became possible to sync via iCloud. The new version of the Pages text editor has also undergone a major design change. Now everything is done in a minimalist style, which allows you not to be distracted when typing in documents. The program also received 60 built-in templates for various types of documents, as in the desktop version of the program. Convenient document collaboration features have been added with tight iCloud integration. Finally, the time has come for Keynote, a program for creating presentations. By the way, once upon a time Apple I developed Keynote software exclusively for creating my own presentations, but now it is a public product that can be used by absolutely everyone. The updated version received new effects and animations for slides, as well as templates. Like Numbers and Pages, Keynote has the ability to work with documents from anywhere. Let me remind you that all these programs are available absolutely free of charge if you buy a new iOS device or if they have already been purchased from you. Otherwise, they will be available in your account at the old prices, with the exception of GarageBand, which is now free.